Welcome to the internet’s most comprehensive resource for the Henry hoover and his family. Firstly, we would like to say that you have made a great choice in choosing a vacuum cleaner that has proven to be massively popular not only with domestic users, but also with commercial users alike.

We set this website up to help you understand more about the Henry hoover and the extended members of his family. Helping you to make the right choice and get the best value for money.

Before we dive into the details of the Henry vacuum range we should have a quick recap, so that you understand how this iconic machine became so popular. We will find out why he makes a great cleaning companion. If you already know which machine you need, then just head straight to our shop to get a great deal!

Who makes the Henry Hoover family?

Henry is made by the British manufacturer Numatic International Ltd. Numatic are a Somerset based company with over 700 employees! The company was founded by Chris Duncan in 1968 when he spotted a gap in the market for a compact canister vacuum. He realised there was a need for a machine that was not only durable, but easy to maintain and work with on a daily basis.

Originally the first vacuum cleaners were sold as commercial units with no name at all, they proved to be a huge success with commercial cleaners in schools and offices all over the country. With people using them at work and finding that they performed so well they wanted to be able to use the same machine at home. It was not long before Mr Duncan realised this and that there was huge potential for a domestic version, this was when Henry was first introduced in the 1980’s.

Numatic now boast a product range of well over 200 products, including those for industrial applications. With Numatics foundations firmly in commercial applications their domestic range is built to a standard that you just don’t see in other vacuum cleaners on the market.

Henry has had a few makeovers here and there in his time, but he has never lost that iconic cheeky smile and red colour that everyone immediately recognises. You have almost certainly been in the same room as him (or at least in a room he has cleaned) in the last week if not the last couple of days. He really is that popular, and it is for a reason.

When he was first introduced he had a 1200W two stage vacuum motor. This was fitted with a “hi-lo” switch so that you could alter the performance of the vacuum between two different power levels when required.

Later “Autosave” was introduced, this meant that Henry started up in the 600W mode by default. Once it was you running you could switch the machine to “high” power mode. This was a great power saving feature as he performed very well in the “lo” mode without wasting the extra power.

In 2015 Henry had one of his biggest reboots. EU legislation meant that the 1200W motor had to go, this was not however something that would be detrimental to his performance. The clever people in the research department at Numatic altered the type of accessories that he came with and used a more modern motor to deliver 30% better airflow improving cleaning performance whilst using only 680W of power. This will reduce your power consumption by nearly 50% saving you money and giving you improved cleaning results, a definite “Win Win!”.

Although Henry may have come a long way since his commercial days he has never lost his ties to his commercial and industrial relatives. The materials chosen for him are the same as those used for almost all of the commercial range, the key reason that these materials were chosen is that they are very durable and can take the ‘rough with the smooth’. The motor whilst being new, is still built to a high grade delivering the same reliability that has always been a key selling feature of the Henry hoover.

One of the things that people hate most about vacuum cleaners is that the cable storage is normally poor and awkward to use, Henry has the solution and this is one of his best attributes. On top of his head in that neat black hat is a cable reel with rewind handle, so when you are done cleaning you can simply and quickly wind the 10 metre cable back inside him. This means in our experience that the cable will not get knotted, or tangled, and certainly won’t be trailed all over your cleaning cupboard floor. The cable however is still long enough that you will seldom have to unplug him when cleaning as he has a really good range.

The filtration on Henry makes him very good at what he does, compared to your average domestic vacuum his filters are HUGE, this goes the same for his bags that offer 9 litres of waste storage. When using Numatic HepaFlo dust bags you will find that the bags offer great performance and value for money. Due to the size of the bags and filters the problem other vacuum cleaners have with blocking is not something you will experience with Henry until he is absolutely full.

Numatic decided when putting him together that he should be well equipped to deal with almost every household task that you may need to tackle. For this reason, he is supplied with a great selection of attachments that include a floor wand, combination floor tool, crevice tool, soft dusting brush and upholstery attachment. All of the tools are 32mm in internal diameter, and can be swapped on and off very quickly making switching from cleaning the floor to dusting the TV stand take seconds.

For every task there is a vacuum attachment that makes him more than capable of doing a good job. If you would like more information on the Henry, including further details on his accessories and what each one should be used for jump into the full review and have a read. We think that you will find henry to be one of the most cost effective and easy to use vacuum cleaners you have ever owned. He will certainly be happy to help you get your home sparkling clean!

Now, lets meet the rest of the family!

Not long after Henry came on the scene it became obvious that he needed a feminine companion for those users who preferred a lady’s touch when it came to cleaning the house. What is the difference between Henry and Hetty I hear you ask, well originally there was no difference in regards to performance or accessories, the only change was that Hetty had a pretty smiley face with eye lashes, and she came in a nice ladylike pink.

For 2016 Numatic decided that she should undergo a bit of an update, she is now more petite than before with a 6 litre capacity. She does still boast the same performance as the now slightly larger Henry, however during the update Numatic added a neat storage solution on her back for all of her accessories, making her a pleasure to clean with.

We have put together a full review on the Hetty vacuum cleaner that you can read here.

To further expand upon the range of capabilities that the family had to offer the Numatic George was introduced, he is a four in one machine that can do more around the home than any of the other domestic Numatic machines. His key abilities that set him apart from the other machines is that he can carry out carpet and upholstery shampooing. He can also suck up water, unblock sinks and a whole host of other jobs. He is a little bigger than some of the other machines because of this, but he is still a pleasure to use and really gives incredible value for money. Find out more information about George in our full write up here.

Charles is almost a stripped down version of the George. He can do everything that Henry and Hetty can do, but adds the ability to suck up water as well as dry dust and dirt. This makes him an absolute hero around the home. Especially when a pipe bursts or someone spills something.

He is blue in colour and has a 15 litre dry capacity and 9 litre wet capacity. He is powered by a 1080w bypass type motor delivering consistent and reliable performance for even the most demanding jobs.

As time passed it became apparent that some people did not have room for the Henry machine and needed something a little more compact, the James Hoover JVP180 was the answer to this. By removing the ‘rewind’ cable head, and creating a slightly smaller drum the James provides the same great performance as the rest of the range, just in a slightly smaller package. He comes with an aluminium toolset that is nice and light to use.

The Henry Extra hoover was introduced to replace what was once known as the “Henry turbo”. The original machine has an electric floor tool, although this floor tool proved to be effective at cleaning, it was also apparent that it was too heavy and was not as reliable as Numatic would have liked.

The research team at Numatic put their minds together and delivered the excellent Henry Xtra in response to this issue. He comes supplied with an Airo floor tool (we cover what this does in more detail on our review page) and an extra dry floor tool, both of these are supplied in addition to the already great combination floor tool. With extra bits of equipment, he delivers great performance on hard floors and carpets whilst still being lightweight and easy to work with.

The Harry Hoover was the last member of the family to come to life, he was introduced for pet owners who needed a vacuum cleaner specifically to deal with pet hair and the unfortunate “pong” that pet hair can sometimes leave in your vacuum cleaner.

Harry has a smaller version of the Airo brush which is aptly named the ‘Hairo Brush’ to remove fur and hair strands from your sofa, stairs and floors. In addition to this to combat unwanted odours he is fitted with an activated carbon filter system, this neutralises odours as they pass through the vacuum cleaner leaving the air fresh and clean. We go into more detail about the Harry on our review page here.

So Where are the Henry Hoover Reviews?

We have covered a little bit about each machine at this point so you should have an idea of roughly which machine may be right for you. Just to be safe though we have gone into even more detail on each machine, you can see the full write-ups by clicking the link in the sidebar or footer, or by clicking here to see the shop page (you can also find a great deal here too!). 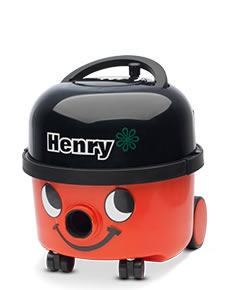 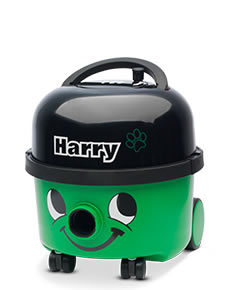